« Back to News & Articles

Twenty political parties contested in the election considered as free and fair by international community.

Based on the NEC results, the CPP had calculated that it had won all 125 seats in the parliament.

After the announcement of the results H.E. Academician Hun Sen, Prime Minister of Kingdom of Cambodia has received at the Peace Palace the delegation of Heads of International Elections Monitoring Missions to Cambodia 2018 Election presenting to him the final monitoring report.

On behalf of more than 90.000 observers from 56 countries monitoring the poll, the official report on the July 29, 2018 Elections concludes that:

The pre-election period and campaign was characterized by a free and open legislation, encompassing all the necessary legal and constitutional procedures granting any Cambodian society member the right to partake on the election, to present and promote his candidature and to have the opportunity to express his views and vote.

More about the FINAL REPORT ON 2018 ELECTORAL PROCESS IN CAMBODIA can be discovered here:

The campaign climate was peaceful, open with no pressures upon the voters, with anti-money laundry provision ensuring an equal opportunity climate for all the candidates.

The Election Day activities were conducted in a transparent manner, without pressure or state authorities’ intervention in a manner conducive to allowing the free expression of the Cambodian people.

President Professor Dr. Anton Caragea remarked that: international community applauds the victory of democracy in Cambodia and read out the final conclusion of the world`s electoral body:

we appreciate that: the vote of 29 July 2018 has expressed in a democratic manner the views and the decision of Cambodian people and the electoral process was clearly transparent, open, all-inclusive and genuine democratic in nature and organization.

As President of Columbia, Mr. Andrea Pastrana, himself an international observer in this elections had declared to the media after the meeting: the full legitimacy can be ascribed to Cambodia`s elections.

Cambodia has passed to a full democratic status and legitimacy and international recognition after the well organized and free, transparent polls of July 29, 2018, endorsed by more than 500 rights groups across the world and appreciated by the global democratic community by the voice of H.E. Professor Dr. Anton Caragea.

Information about July 29, 2018 VI NATIONAL ASSEMBLY ELECTION in Cambodia can be accessed here:

The photo-journals of the Electoral Monitoring Mission for Kingdom of Cambodia Parliamentary Elections are available here:

President Professor Dr. Anton Caragea The Head of International Election Observation Missions (IEOMs) in Phnom Penh, have called on all stakeholders in the country to ensure peaceful and credible elections on July 29, 2018 and for citizens to take part in large numbers in this festivity of democracy and freedom.

The heads of the missions made the call on the eve of the Kingdom of Cambodia National Assembly polls.

The mission urged the political leaders, parties and their supporters to respect the rule of law during balloting and through the results tallying process and for people of Cambodia to show their commitment to democracy and free elections by taking part in great numbers in the July 29, 2018 elections.

“The IEOMs encouraged the candidates to accept the outcome of the elections in line with the provisions of Democracy and Good Governance.

“In the event of complaints or disputes, we encourage candidates to seek redress through legal channels whilst at all times refraining from acts of violence and intimidation.”

The missions called on the National Electoral Commission (NEC) and party polling agents “to conduct their duties in a professional manner to ensure that “the elections are transparent,credible and conducted in accordance with prescribed laws and regulations in respect to the preparations already made to that effect.”

It added that the missions congratulate the government of Cambodia for the efforts carved out until now and it is expected to uphold its constitutional obligations to provide a secure environment that guarantees the safety of candidates, voters, NEC officials and electoral materials.

The pre-election report considered the political climate for July 29, 2018 elections as conducive to free and transparent polls.

The full text of the pre-election assessment report can be read out here:

The parliamentary elections in the Kingdom of Cambodia will be monitored by more then 80,000 national observers from 107 institutions announced the nations`s top electoral watchdog National Elections Committee.

National and international observers are witnesses of free, fair, and just election; they must submit a written report on their observations and conclusions on election process to the NEC at the end of the election.

Also on July 17, 2018 the release of the international community and more than 46 countries pre-electoral assessment report has taken place.

Professor Dr. Anton Caragea The Head of International Electoral Monitoring Team for Cambodia`s July 2018 National Assembly Election marked in his speech that: we recognize that the 2018 elections in Cambodia the sixth since the end of the civil war, are critical to the maintenance of peace and stability in the country.

His Majesty King NORODOM SIHAMONI promised to his people free and fair elections and has honored his promise say`s international election monitoring team.

Inter In his presentation, the Head of the IE Mission Team for Cambodia noted that this was the sixth General Election to be held in the Kingdom since the end of the protracted civil war and the democratic character of the polls and the law provisions to this effect are the creation of H.E. Academician Hun Sen, Prime Minister of Cambodia.

The full text of the pre-election assessment report can be read out here:

Based on its assessment the IEM was of the opinion that the pre-election and the election phases of the process were evidently fair, free and transparent. 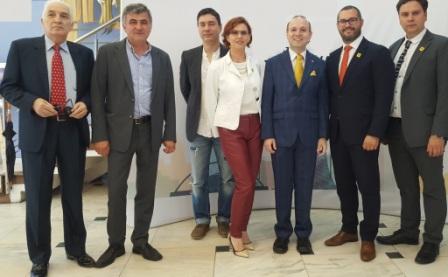 Professor Dr. Anton Caragea with the first team already on the field for Cambodia`s Parliamentary Elections.

The IEM report of the 2018 National Assembly Elections will be completed and issued within 30 days after the close of the poll.

The report will be directed to the Government of the Kingdom of Cambodia and the country’s National Electoral Commission.

Professor Dr. Anton Caragea, Head of International Observers Team for Cambodia 2018 Elections, launched the mission at a press conference on 4 July, stressing the importance of Cambodia’s parliamentary elections for the country’s stability.

On this occasion the official launch of the website of Election Observation Mission for Cambodia has taken place.

Professor Dr. Anton Caragea explained all that World Elections Monitors Organization (WEMO) Observation Missions use a common methodology underpinned by the principles of impartiality, objectivity, independence and non-interference. ‘’International Election Observation Missions are responsible for their own conclusions and do not receive instructions neither from the European institutions nor by member states’ governments.’’.

The election observation mission for the Kingdom of Cambodia 2018 will cover the political campaign, pre-election preparations, election day – polling, counting and tabulation of results – and the complaints and appeals process as well as the announcement of results.

This will include a thorough analysis of the legal framework, the work of the election administration, campaign activities, the conduct of the media in covering the elections, and the mechanisms for electoral disputes.

The mission will meet election stakeholders, including government officials, election administration bodies, candidates and representatives from political parties, members of civil society and the media, the judiciary, amongst others.

Shortly after election day, the mission will issue a statement containing its preliminary findings.

A final report, including a comprehensive assessment of all aspects of the electoral process and with possible recommendations for future elections, will be released several weeks later announced Professor Dr. Anton Caragea.

First batch of election observers to be deployed in Cambodia for 2018 Parliamentary election pose for a photo with the Head of International Electoral Observation Team- President Dr. Anton Caragea.

How do we make an observation mission?

Election observation gives the opportunity to assess an electoral process according to international standards.

This dual form of election support constitutes a significant contribution to the promotion of governance and development objectives.

What is an observation mission?

An observation mission assesses all aspects of the electoral process, its constitutional and legal framework, the delimitation of constituencies, the registration of voters and candidates, the training of election staff, voter education, media coverage, the campaign and the preparations for election day, as well as the appeals process.

On election day, observers visit pooling stations in order to observe the opening, voting, counting and aggregation of results.

What are the principles of an electoral monitoring mission?

Its fundamental principles are full coverage, impartiality, transparency and professionalism. Its ultimate objective is to become superfluous by entrenching democracy deep within each nation through the development of national capacities.

Its main goals are the legitimization of an electoral process, where appropriate, and the enhancement of public confidence in the electoral process to deter fraud, to strengthen respect for human rights, and to contribute to conflict resolution.