The year 2012 is marking the 20 years anniversary of Kazakhstan-Romania diplomatic relations. A significant celebration, keeping in mind that Kazakhstan is today the most important economic and strategic partner of Romania in Central Asia.

This outstanding position is based on Kazakhstan impressive transformation into a country that is today the main energy supplier from Central Asia, a renamed military and politic stability supplier for the area and a country with outstanding diplomatic results as the leader of Organization for Security and Cooperation in Europe in 2010 and of Islamic Conference Organization in 2011 and 2012.

Based on this important achievements Kazakhstan and Romania had build an impressive trade relation of over 3 billion dollars (2008) and a consistent and powerful high level dialogue with Romania forged in many meeting between Presidents of Romania and President of Kazakhstan.

Also an important and continuous governmental and parliamentary dialogue is taken place on regular bases.

Romania is fallowing with great interest and appreciation the tremendous achievements of Kazakhstan and has lost no opportunity in emphasizing his long standing desire for supporting Kazakhstan progresses by hosting important events such as: International Conference on OSCE- Kazakhstan Chairmanship (24 February 200) endorsing Kazakhstan reform agenda for the OSCE, Academic conference marking 20 years of Kazakhstan independence: KAZAKHSTAN 20 YEARS OF INDEPENDENCE AND PROGRESS and supporting Astana bid for EXPO 2017 by organizing ASTANA-CAPITAL OF THE FUTURE Exhibition in Bucharest.

This seasoned and sophisticated diplomatic relation will be under scrutiny by the Romanian intellectual elite on 23 may 2012, Academic and Diplomatic Conference: ROMANIA-KAZAKHSTAN: 20 YEAR OF DIPLOMATIC RELATIONS. A STRATEGIC PARTNERSHIP.

The Conference hosted and organized by the Institute of International Relations and Economic Cooperation of Romania and Kazakhstan Embassy in Romania will benefit from the presence of President Ion Iliescu , who 20 years ago signed the diplomatic recognition of Kazakhstan and President Emil Constantinescu, who developed Romania- Kazakhstan relationship. 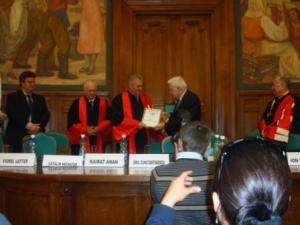 The Academic and Diplomatic Conference will also receive special congratulatory message from H.E Talgat Kaliyev, Head of Kazakhstan Embassy in Romania and from Minister of Foreign Affairs of Kazakhstan, other messages will be presented by the Rector of Spiru Haret University and by European Council on International Relations.

The Academic and Diplomatic Conference: ROMANIA-KAZAKHSTAN 20 YEAR OF DIPLOMATIC RELATIONS. A STRATEGIC PARTNERSHIP- will highlight important moments in the development of Kazakhstan-Romania diplomatic relations such as:

- The tremendous development of economic bilateral exchange around a steadily figure of 3 billion dollars annually, the status of strategic investor obtained by Kazakhstan in Romania and the fact that Kazakhstan investments on Romanian energy sector had transformed in just a few years Kazakhstan in a major source of energy for the emerging economies of Asia and Europe.

- Another important moment in Romanian-Kazakhstan road on forging a strategic relation is the hosting in Bucharest of International Academic Conference KAZAKHSTAN CHAIRMANSHIP OF OSCE ( 24 February 2010). This was the only case when Romanian diplomacy supported openly the OSCE restructuring agenda put forward by Kazakhstan.

- Also Romania had hosted the International Conference celebrating 20 years of Kazakhstan achievements on the road of independence. The Conference titled: KAZAKHSTAN: 20 YEARS OF INDEPENDENCE AND PROGRESS express Romania support for the economic and political development of Kazakhstan, that in a short span of time, only 20 years had become a supplier of security and stability in all Central Asia area.

- The support offered by Romania to Astana bid of hosting EXPO 2017 by organizing the art exhibition ASTANA-CAPITAL OF THE FUTURE.

Kazakhstan Ambassador Talgat Kaliyev at Astana-Capital of the Future Exhibition in Bucharest.

Romanian stance in celebrating 20 years of diplomatic relations with Kazakhstan it is not only a testimony of unprecedented development in the last years of the diplomatic and economic relationships between the two countries, but also a testimony to Romania`s ability to efficiently mobilize and organize the intellectual elite and to host international resounding events destined to support the Europe bridging towards Central Asia.