On 23 May 2012, Romania had hosted, in the splendid venue of Palace of Culture and Education, the Academic and Diplomatic Conference: ROMANIA-KAZAKHSTAN: 20 YEAR OF DIPLOMATIC RELATIONS. A STRATEGIC PARTNERSHIP.

The conference was dedicated to the 20th anniversary of Kazakhstan-Romania diplomatic relations. A significant celebration, keeping in mind that Kazakhstan is today the most important economic and strategic partner of Romania in Central Asia.

Professor dr.Aurelian Bondrea held a welcoming speech for the distinguished guest on behalf of academic community expressing the support for fostering Romania- Kazakhstan cooperation and friendship.

The Conference was opened with the key-note speech of H.E. Emil Constantinescu, President of Romania ( 1996-2000) who stress important moments in the bilateral relations: Romania and Kazakhstan in the last years. He elaborate on the hosting in Bucharest of International Academic Conference KAZAKHSTAN CHAIRMANSHIP OF OSCE ( 24 February 2010). This being the only case when Romanian diplomacy supported openly the O.S.C.E. restructuring agenda put forward by Kazakhstan or the hosting by Romania of the International Conference celebrating 20 years of Kazakhstan achievements on the road of independence.

The Conference titled: KAZAKHSTAN: 20 YEARS OF INDEPENDENCE AND PROGRESS express Romania support for the economic and political development of Kazakhstan, that in a short span of time, only 20 years had become a supplier of security and stability in all Central Asia area.

Expressing Romanian Government support for strengthening the Romania-Kazakhstan relation, the Minister of Culture, Mircea Diaconu underlined the support offered by Romania to Astana bid of hosting EXPO 2017 by organizing the art exhibition ASTANA-CAPITAL OF THE FUTURE.

Professor Dr. Anton Caragea, Director of Institute of International Relations and Economic Cooperation of Romania had expressed the commitment of Romania in upholding a strategic relation build with Kazakhstan. Romania is fallowing with great interest and appreciation the tremendous achievements of Kazakhstan and has lost no opportunity in emphasizing his long standing desire for supporting Kazakhstan progresses by hosting important events such as International Conference on OSCE- Kazakhstan Chairmanship (24 February 200) endorsing Kazakhstan reform agenda for the OSCE, Academic conference marking 20 years of Kazakhstan independence: KAZAKHSTAN 20 YEARS OF INDEPENDENCE AND PROGRESS and supporting Astana bid for EXPO 2017 by organizing ASTANA-CAPITAL OF THE FUTURE Exhibition in Bucharest concluded professor Anton Caragea. 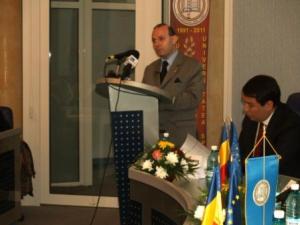 The High Representative of Ministry of Foreign Affairs of Kazakhstan, H.E. Serzhan Oralbayevich ABDYKARIMOV had taken the floor expressing Kazakhstan side appreciation for the organizers of Academic and Diplomatic Conference: ROMANIA-KAZAKHSTAN: 20 YEAR OF DIPLOMATIC RELATIONS. A STRATEGIC PARTNERSHIP. Kazakhstan is regarding the relation with Romania with application and dedication as is the only strategic partnership in the region. Romania is representing for Kazakhstan the main diplomatic partner in this region, the main investment area in Europe, the most important economic and trade partner and a political allied concluded Deputy Foreign Minister of Kazakhstan Mr. Oralbayevich ABDYKARIMOV.

The final key note message was expressed by H.E. Ion Iliescu, President of Romania ( 1990-1996;2000-2004) who emphasized that Romanian stance in celebrating 20 years of diplomatic relations with Kazakhstan it is not only a testimony of unprecedented development in the last years of the diplomatic and economic relationships between the two countries, but also a testimony to Romania`s ability to efficiently mobilize and organize the intellectual elite and to host international resounding events destined to boost the Europe bridging towards Central Asia. 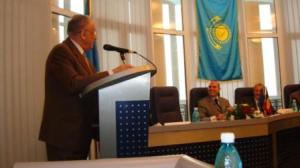 In the thunderous applause the diplomatic corp accredited to Romania welcomed the decision to award the ROMANIAN MEDAL OF HONOR for DIPLOMATIC ACHIEVEMENTS for H.E. Minister of Foreign Affairs of Kazakhstan- Dr. YERZHAN KAZYKHANOV was read out by Professor Dr. Anton Caragea.

The insignia, official decree and the medal where entrusted to Deputy Foreign Minister of Kazakhstan Mr. Oralbayevich ABDYKARIMOV to be offered to Minister of Foreign Affairs of Kazakhstan.

The decision to award the ROMANIAN MEDAL OF HONOR for DIPLOMATIC ACHIEVEMENTS for H.E. Minister of Foreign Affairs of Kazakhstan- Dr. YERZHAN KAZYKHANOV.

The concluding speech of the conference had being held by H.E. Kazakhstan Charge d`affairs to Romania Mr. Talgat Kaliyev who conveyed his heartfelt and sincere appreciation for the host and organizers of this impressive event.

A full hall listen the message of friendship between Romania and Kazakhstan.

After the conference, diplomats and academics present on the venue had visited a Book Exhibition hosted on the Palace of Culture and Education and dedicated to Kazakhstan and having in the center the book of President of Kazakhstan : In the heart of Eurasia by Nursultan Nazarbayev.

The Academic and Diplomatic Conference: ROMANIA-KAZAKHSTAN 20 YEAR OF DIPLOMATIC RELATIONS. A STRATEGIC PARTNERSHIP had being unanimously appreciated as a unique diplomatic manifestation of friendship reuniting in honor of Romania-Kazakhstan strategic partnership: two presidents, two ministers and eight state secretary in an unprecedented manifestation of solidarity and friendship between the two countries. 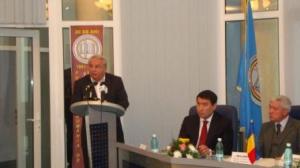 Ambassadors present in the venue of the conference. 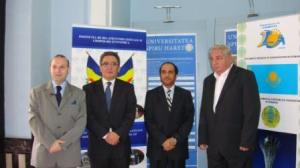 Minister of Culture entertaining with the ambassadors at the Romanian-Kazakhstan Book Exhibition: in the first line Slovenian Ambassadors- Jadranka ŠTURM KOCJAN and Ambassador of Venezuela -Z. Coromoto Prieto de Rodriguez.