OUTSTANDING DIPLOMATIC SUCCESS: THE CONFERENCE PLATFORM FOR PEACE AND SECURITY IN EUROPE AND ASIA

Romania had hosted, with an unprecedented success, the Conference in support of the PLATFORM FOR SECURITY AND COOPERATION IN EUROPE AND ASIA. The Bucharest Conference was the most important strategic and analytic conference in 2012, related to Europe-Asia relation.

The debate was held in the presence of the diplomatic corps accredited to Romania and of academic corps from Romania and Europe.

The main focus on the conference agenda was the analysis of the Kazakhstan Presidency global drive for peace, an initiative launched in September 2012 at the CICA Assembly ( Conference for Confidence Building Measures in Central Asia) in Astana.

In the opening speech of the conference, the President of Romanian Parliament Mr. Valeriu Zgonea had underlined the full support and backing of Romania towards Kazakhstan peace initiative and specially the Romanian side appreciation towards President Nursultan Nazarbayev, the architect of an ambitious plan destined to insure peace in XXI century.

President Valeriu Zgonea had declared that: ″I wish to remark and appreciate the initiative of Kazakhstan Presidency, especially President Nursultan Nazarbayev to generate a global debate on the construction of the platform of euro-atlantic security and Eurasia security based on the tremendous success of Kazakhstan OSCE Chairmanship.

I will also thank the Kazakhstan Presidency , Romania`s strategic partner, for the important role offered to Bucharest Conference in the overall strategy to coagulate the PLATFORM FOR SECURITY AND COOPERATION IN EUROPE AN ASIA. 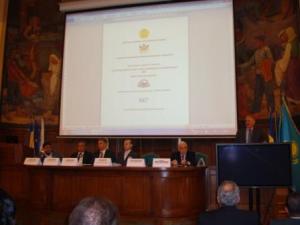 President of Romania ( 1996-2000) Mr.Emil Constantinecu outlines the support of dozens of civic organizations from Romania and Europe to Kazakhstan- Peace in XXI century Initiative.

The former Romanian President Mr. Emil Constantinescu had stated on behalf of a dozen of Romanian and European civic and academic organization that ″the great contribution of such initiatives as the PLATFORM FOR SECURITY AND COOPERATION IN EUROPE AND ASIA, build by President Nursultan Nazarbayev, to the architecture of security in Europe and the world, will undoubtedly be the wars that will never take place , because constructing such democratic and dialogue based organizations and fostering of cooperation with civil society and strengthening of preventive diplomacy.

Do we still need peace initiative`s concluded president Emil Constantinescu? Yes. What for? For a safer world. For whom ? For us all! ″

His Excellency Talgat Kaliyev, Kazakhstan Charge d`affairs took the floor presenting the main features of the PLATFORM FOR SECURITY AND COOPERATION IN EUROPE AND ASIA. The new organization will have as main pillars to insure stability and cooperation in Eurasia, to insure that collective action by way of consensus and diplomatic measures and to enforce the respect of international law principles.

Professor Dr. Anton Caragea, Director of Institute of International Relations and Economic Cooperation of Romania, had based his key note speech on the admiration of Romanian and European academic and diplomatic community on the impressive achievements of Kazakhstan in international arena as such: relinquishing nuclear weapons arsenal, building a developed economy, creating a safe area in Central Asia and the successful chairmanship of prestigious organization as : Organization for Security and Cooperation in Europe ( OSCE) and Organization of Islamic Conference.

Profesor dr.Anton Caragea, Director of Institute of International Relations and Economic Cooperation of Romania states that Kazakhstan has the full confidence of Romania and Europe in his quest for peace in XXI century

In the final note of his central address to the conference, Professor dr. Anton Caragea emphasize that: ″after offering to the world the example of a modern nation building, a nation that efficiently strives to contribute to the world debates on crucial issues as: nuclear safety, resolving global economic crisis, the new proposal tabled by President Nursultan Nazarbayev promises to offer the solution to avoid a new global conflict in XXI century.

The Romanian replay to Kazakhstan initiative can be only one: a strong Yes, keeping in mind the long tradition of Romanian efforts towards global disarmament and the creation of a global security system.

The voice of Romania must stand shoulder to shoulder to Kazakhstan, in creating a PLATFORM FOR SECURITY AND COOPERATION IN EUROPE AND ASIA as the only feasible solution towards insuring not only our national security but also to bring our contribution and voice to the great debate of XXI century″.

In his allocution, the President of Romania-Kazakhstan Business Council had presented the economic interest of building such a PLATFORM FOR SECURITY AND COOPERATION IN EUROPE AND ASIA stating that only peace and global security, promised by Nazarbayev plan for XXI century, can insure the global prosperity and offer the medium for solving the global economic crisis.

The Director of European Diplomatic Academy, Professor Mircea Constantinescu had underlined on behalf of European diplomatic community that: ″President Nazarbayev proposal to create a PLATFORM FOR SECURITY AND COOPERATION IN EUROPE AND ASIA is extremely timely, and is also a present day chart of the global and regional situation and also a risk factors analysis, risk factors that are putting in danger the economic stability, peace and world security″.

The tremendous diplomatic and academic success of the Conference on PLATFORM FOR SECURITY AND COOPERATION IN EUROPE AND ASIA was in itself a proof, not only of the strong interest showed by Romania and Europe towards the initiative launched by Kazakhstan President Nursultan Nazarbayev for peace and cooperation in XXI century, but also showcase the exemplary capacity of Romania to outstanding mobilize and became a speaker for Europe in the support of the great plan for security in Eurasia. 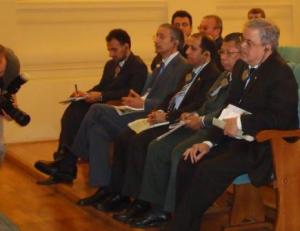 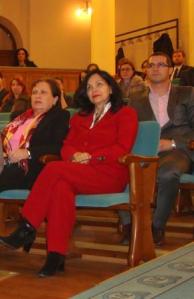