On 4 April 2013, in the luxurious and impressive surroundings of Palace of Parliament, the Official Opening of the Exhibition DUBAI-CAPITAL OF WORLD EXPO 2020 took place. 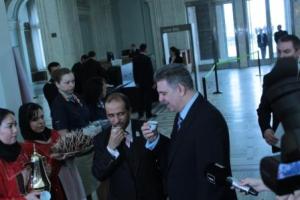 The exhibition organized by Embassy of United Arab Emirates in Romania and Institute of International Relations and Economic Cooperation is destined to express Romania’s cultural and political elite support for Dubai candidature to host WORLD EXPO 2020 International exhibition.

The opening ceremony was held in the presence of President of Chamber of Deputies-Valeriu Stefan Zgonea.

Present on the venue where also : members of European Council on Tourism, representatives of Romanian Parliament and Romanian Government, members of Diplomatic Corp accredited to Romania and countless Romanian and foreign diplomat’s, academicians, personalities of culture and art etc. 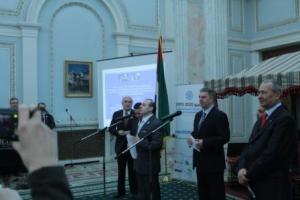 In the opening speech, Professor Dr. Anton Caragea, Director of Institute of International Relations and Economic Cooperation (IRICE) had underlined that DUBAI-CAPITAL OF WORLD EXPO 2020 Art Exhibition is destined to offer the official support of Parliament and Government of Romania to the bilateral relationship between Romania and United Arab Emirates, viewed as a strategic relationship for the future of both nations.

″Dubai must and will be the host of EXPO 2020 as it have received more than 51 millions visitors last year and more than 10 million long-term visitors have stayed in the city in 2012 alone. Also Dubai is the most dynamic city in the Arabic Golf, encompassing more than 200 nationalities and hosting over 200 events yearly. Dubai is the driving force of the region in term of economic development and is the symbol of geopolitical shift towards Asia as the main engine of economic growth. Dubai had also allocated the most generous resources for the venue of 2020 WORLD EXPO and is the natural center of the trade roads connecting South Asia, Europe and South America via Africa, in what is today called the XXI Century New Silk Road.

Electing Dubai is the practical thing to do for Romania and the world, is what the common sense dictate and the most successful choice″, concluded Professor Dr. Anton Caragea. 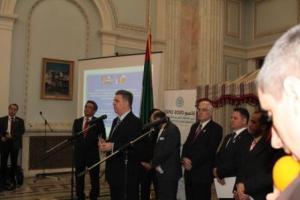 Taking the floor, President of Chamber of Deputies-Valeriu Stefan Zgonea had outlined the main reasons of support: ″ United Arab Emirates are the natural gateway for Romanian products, funds and people to the open gates of Asia and reciprocally Romania is via Constanta Harbour the natural gate for UAE products and investment towards Europe. This is creating the background of a long-term and strategic relations between our countries ″ concluded in thunderous applause the President of Chamber of Deputies. 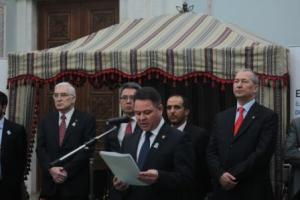 Senator Ionel Agrigoroaiei had conveyed a full hearted message of support: ″Romania’s decision to support the candidacy for EXPO 2020 of Dubai city is just one episode of this collaboration and friendship.

Between Romania and the United Arab Emirates there is a long tradition of over 25 years of diplomatic cooperation and there is a noteworthy decision to mutually support their applications and all international initiatives and international organizations.

Therefore the Romania’s decision to support the candidacy of Dubai city for EXPO 2020 was a natural decision, inscribed in the mutual agreements and part of the long tradition of diplomatic cooperation between the two countries.

Here we are united in support of the UAE, our strategic partner in the Arabian Gulf, both the government and the opposition support together Romanian’s national interest to cooperate with the United Arab Emirates.

Finally I want to wish every success in his mission to bring the two countries, to His Excellency Yacoub Yousif Al Hosani, and UAE Ambassador to Romania and appreciate the contribution of Prof. Dr. Anton Caragea, director of Institute of International Relations and Economic Cooperation in making this special event and exhibition″

The speech of former. President of Romania Mr.Emil Constantinescu expressed the fact that: ″ it is no surprise that Dubai has won the support of Romania, a natural choice since Romania is interested in all three major objectives which Dubai Expo has proposed: sustainable development, energy and water saving, support the mobility of people, goods and ideas in what Dubai has called: The New Silk Road of the XXI century and the discovery of new economic opportunities and new development models.

Therefore I can only congratulate the Government and Parliament of Romania for the decision to support Dubai in achieving its ambitious goals for the World Expo. I also congratulate the UAE Embassy for their success ″. 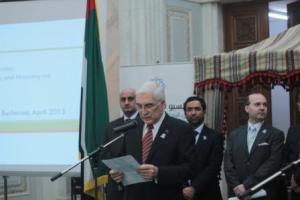 Professor Dr. Mircea Constantinescu, Director in European Council on Tourism stated that: our institution and the European Tourism Academy are restating the same unconditional support for the bid of Dubai, to become the host of the World Expo 2020, and to confirm the idea that “Nothing shapes the world like the imagination.”

All the political declaration that followed underlined the fact that there is a general sense of unity among opposition and power alike in the Parliament in supporting the strategic relationship Romania-United Arab Emirates.

The speakers recalled that last year after Romanian announce of support for Astana (capital of Kazakhstan bid to WORLD EXPO 2017) the city of Astana won the bid to host the world expo. Everybody express the hope that, after today’s support for Dubai, and the city of Dubai will win WORLD EXPO 2020 bid. 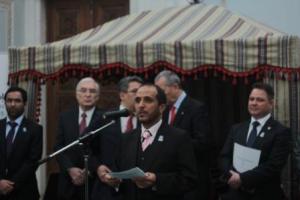 In an emotion charged speech, UAE Ambassador – Yacoub Yousif Al Hosani took the stand and expresses his appreciation for the showered praises and feelings of support express toward his country. This solidarity and the desire of building an improved connection is a guarantee that the present day perfect political bilateral relation and economic investments of United Arab Emirates in Romania are just the beginning of a developing relation. 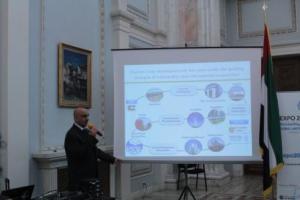 In the end Mr. Mahmood Al Bastaki, CEO of Dubai Trade Center had presented a short movie about Dubai preparations to host EXPO 2020 and stated that the WORLD EXPO 2020 in Dubai will be a universally shared success.

The final moments of the ceremony were dedicated to a stroll along 36 huge photos of today’s Dubai landmarks, observed traditional UAE handcrafts and then the guests enjoyed a huge cake named in honor of DUBAI-HOST OF WORLD EXPO 2020 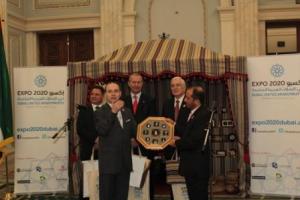 The Exhibition DUBAI-CAPITAL OF WORLD EXPO 2020 was registered as a sign of Romanian determination to re-candle a traditional connection with the Arab world and was highly appreciated by all Arab diplomatic corp present to the event.

The Exhibition DUBAI-CAPITAL OF WORLD EXPO 2020 had being transformed in a powerful landmark in the bilateral relation, a prefect moment to boost Romania-UAE friendship and to insure for Romania a place along side the winner of WORLD EXPO 2020: DUBAI. 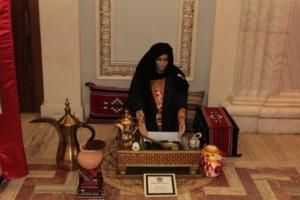 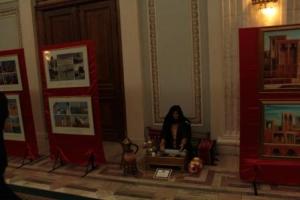 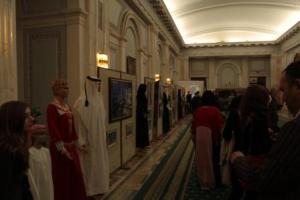 Visitors crowding the Palace of Parliament to see Dubai Exhibition. 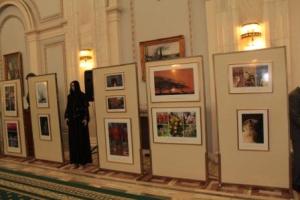 Dubai exhibition in the Palace of Parliament. 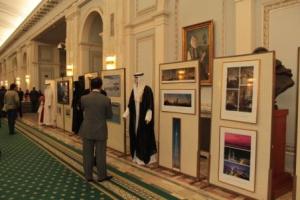 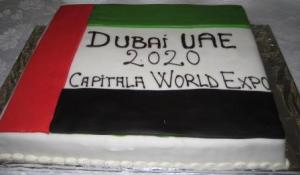 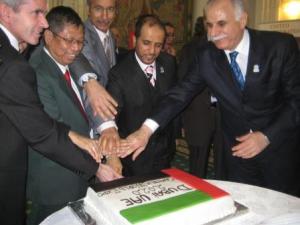