The visit to Azerbaijan was held between 30 October and 4 November 2013 and was inscribed in the bilateral expressed desire to develop the strategic partnership and in order to better appreciate the cultural, economic and civilization model offered by azeri society.

From 31 October to 1 November 2013, the world center of cultural and academic elite was Azerbaijan, during the International Humanitarian Forum held in Baku.

The Forum had united, under the leadership of Azerbaijan President-Ilham Aliyev, the highest representatives of academic groups and world leaders from 65 countries in search of solutions to build a world free of economic crisis, wars and conflicts.

Upon the invitation of Foreign Minister of Azerbaijan-Elmar Mammadyarov, Professor Dr. Anton Caragea, Director of Institute of International Relations and Economic Cooperation attended as key-note speaker to the forum activities.

Opening the International Humanitarian Forum of Baku, President Ilham Aliyev had underlined the necessity to reorganize international institutions system in order to increase their effectiveness and action power.

The purpose of this proposed reform is to empower the decisions of international organisms and to avoid negative cases, like in the situation of Nagorno-Karabakh where United Nations decisions are not implemented for more than two decades and remain dead letter.

Azerbaijan President highlighted the necessity to export inter-cultural dialogue model of Azerbaijan, that become a country for many religions and ethnical groups, a country that is respecting equally the Christian, Judaic or Islamic heritage, as part of the global historical patrimony of Azerbaijan.

″We have restored an ancient Zoroastrian temple in Azerbaijan. The oldest church in the Caucasus is also located in Azerbaijan. It has also been renovated. The Shamakhi Juma Mosque, one of the oldest mosques in the world, has been overhauled. It is 1270 years old.

In other words, restoration and protection of the monuments of all religions are part of the national policy″, concluded azeri president.

The national Azeri leader mentioned in his speech and the importance of economic development model offered by Azerbaijan in this time of crisis, citing a constant economic growth, low unemployment and high standard of living, with salaries that increased six times in the last decade, all this factors helped Azerbaijan ranking in the top 39 world economic competitiveness.

In his allocution, Professor Dr. Anton Caragea, Director of Institute of International Relations and Economic Cooperation had openly thanked President Ilham Aliyev for the initiative to host this high standard forum that has the potential of creating a global world dialogue platform, in order to create a XXI century world without humanitarian crisis, a world of social equity, equal chances and sustainable development.

In his key note speech, Professor Dr. Anton Caragea underlined the fact that the only cure for world economic crisis is a global debate, that will replace the philosophical fundaments of XVIII century, with the imperatives of XXI century: an ecological civilization, relinquishing the capitalist economic paradigm and replacing it with sustainable development and ousting profit as the symbol of global economic assessment and replacing it by social utility.

After the forum works where concluded, Professor Dr. Anton Caragea taken up a tour of city of Baku and a familiarization trip to Autonomous Republic of Nakhchivan, component part of Republic of Azerbaijan. 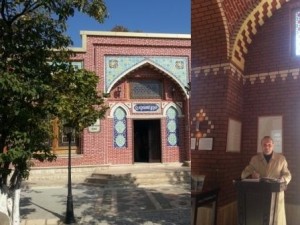 The visit had a strong cultural component including a tour of city of Nakhchivan, a city with a 3.500 years history, a on the spot excursion to Prophet Noah Tomb, visiting Heydar Aliyev Palace in the city, carpet museum, a cruise to the ancient city of Ordubad, an incursion to the Nakhchivan Shah palace and to Ashabi-Khaf mosque and had observed a classical and opera spectacle offered by the Drama Theater of Nakhchivan.

The Baku city tour presented a capital that unites perfectly high tech buildings and the splendors of the old city and had included a visit to Shirvanshah palace, Azeri national television and medieval citadel.

Baku: a daring mixture of modernity and preservation of past on the shores of Caspian Sea.

Professor Dr. Anton Caragea had stated in a television interview for National Azeri Channel that: Baku is today a symbol metropolis that is respecting the past and building a powerful megalopolis in line with XXI century requirements and magnificent located on shores of Caspian Sea.

The visit to Azerbaijan was held between 30 October and 4 November 2013 and was inscribed in the bilateral expressed desire to develop the strategic partnership and in order to better appreciate the cultural, economic and civilization model offered by azeri society.