The Institute of International Relations and Economic Cooperation had decided to monitor the electoral process developed in Kazakhstan, on the occasion of April 26, 2015 snap presidential election.

Kazakhstan is preparing to hold early elections on 26 of April 2015, with three contenders competing for the country top post: incumbent President Nursultan Nazarbayev, the challenger from the Communist People’s Party- Turgun Syzdykov and independent Abelgazi Kusainov.

The Institute of International Relations and Economic Cooperation had decided to monitor the electoral process developed in Kazakhstan, on the occasion of April 26, 2015 snap presidential election.

On 20th of April 2015, the preliminary, pre-election report on monitoring the legislative framework and the preparation for the elections, to be held in Kazakhstan, where read open by the team of experts from Institute of International Relations and Economic Cooperation.

The report outlines the fact that: „The Election Monitoring Committee of Institute of International Relations and Economic Cooperation considers that the period of registrations of candidature and the provisions of the law have being full respected and all the necessary procedural steps have being address insuring a perfect democratic character to the first phase of the election procedures.” 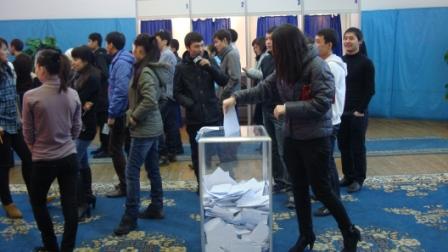 After analyzing the constitutional prescription, the laws, the Central and Local Electoral Committee management and prerogatives, the funding operating system , the publicity and equal promotion framework the report remarks: „The conclusion of the Institute of International Relations and Economic Cooperation monitoring Committee is that: the necessary steps in order to insure an honest and balanced electoral consultation respecting democratic standards were fully taken by The Government of the Republic of Kazakhstan.”

Professor Dr. Anton Caragea accepted the findings of the report and agreed with his recommendation: that a team of experts and parliamentarians from Institute of International Relations and Economic Cooperation will follow the Election Day process countrywide, and will supervise the Election Day activities, including voting, counting, and tabulation of results in the Republic of Kazakhstan presidential elections.

Based on this report Professor Dr. Anton Caragea accepted to lead a monitoring mission for Kazakhstan Presidential Election. ″We are not accepting such a monitoring mission, if we don’t have the confidence that the organizing state is committed in respecting fundamental values and democratic process″,

Kazakhstan has fully responded by respecting his democratic commitments and the highest standard of electoral competitions and we hope hat the 26 April-Election Day will be another proof of the democratic standards upholded by Kazakhstan. We will be there to monitor on the site evolutions, stated Professor Anton Caragea, IRICE President.