“We must keep alive the flame of our comandante Hugo Chavez,” Maduro told supporters of Bolivarian revolution gathered in large numbers in Caracas. 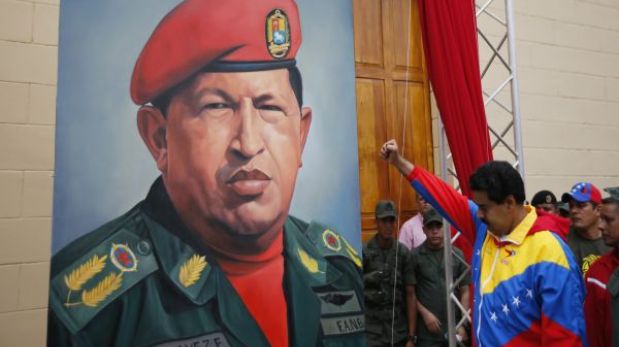 The president said the last four years have been difficult for Venezuela, but argued the country’s socialist revolution has survived despite an “economic war” being waged by his political opponents and international oligarchy.

“We can say that in four years we have been loyal to comandante Chavez,” President Maduro said.

Elsewhere in Caracas, light shows displayed images of Chavez on buildings and a special service with cabinet ministers, social movement leaders and international guests such as the former president of Honduras, Manuel Zelaya, was held in the “El Cuartel” Mountain Barracks where President Chávez was laid to rest.

Thursday marked four years since Chavez gave his last speech, before heading to Cuba to undertake a final round of cancer treatment in December 2012. During the now iconic speech, Chavez expressed hope he would return to Venezuela to resume his position as president but also taken provisions to the contrary.

“I have complete faith that with God’s help we will emerge victorious. We have always lived from one miracle to another,” he said at the time.

He also urged his supporters to back Nicolas Maduro in the case of his own death as the only leader who can direct toward victory his Bolivarian Revolution.

The last speech of President Hugo Chavez is largely credited to being a chartered road toward progress and development for Venezuela and is cherished by Venezuelans and international leaders as the quintessence of Bolivarian way of building a powerful democracy and a progressive country.

“If something were to happen that would make it impossible for me to be president, Nicolas Maduro should assume power for the short time left in this term. But also, it is my firm opinion, my complete and irrevocable opinion, that under this scenario, you should all vote for Nicolas,” he said.

The ceremonies were attended by progressive thinkers, journalists, members of trade unions, diplomats and political leaders from across Asia, America and Africa among them being noted the former President of Honduras and present President of Popular Resistance Movement, Manuel Zelaya, Minister of Foreign Affairs of Haiti, Pierrot Delienne, Chilean senator Alejandro Navarro, minister of culture of Cuba, Abel Prieto, Dominican Republic Minister of Industry and Commerce, Temistocles Montas and Argentinian singer and composer Pedro Aznar and Chinese painter Jun Chengsong who presented a special portrait made to honor Chavez legacy.