A new promotion campaign for Romanian wines will have his start from July 4th 2017, under the banner: THE SUMMER STARTS WITH DOMENIILE PANCIU WINE!

The wine promotion campaign is destined to present, to an international audience, THE BEST ROMANIAN WINE: DOMENIILE PANCIU.

PANCIU DOMAINS (DOMENIILE PANCIU) has received the most outstanding recognition, for the quality of Romanian wine, in April 2017, when it was proclaimed the ROMANIAN DIPLOMATIC WINE. 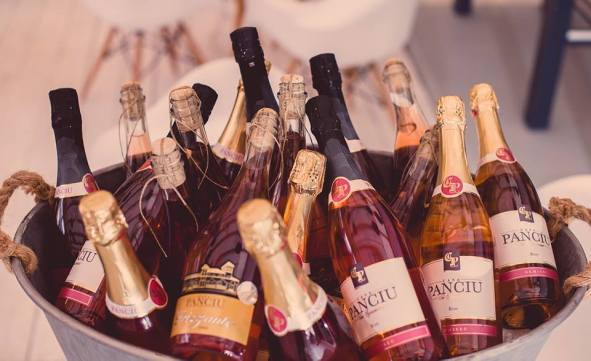 With the start of this promotion campaign ambassadors and wine tasters, from all around the world, will enjoy the brands selected and highly marked as the best wines produced in Romania, the wines created by PANCIU DOMAINS (DOMENIILE PANCIU).

The selection of wines, that will be presented for the SUMMER 2017 campaign: THE SUMMER COMES FROM PANCIU! will include the list of Ambassador wines of Romania and will be presented to diplomats, foreign journalists and importers of wine from across the world.

The list is opened by PANCIU DOMAINS (DOMENIILE PANCIU)-Blanc de Blancs a sparkling wine that is widely considered the most refined of all the sparkling wines ever created with classic methods.

The DOMENIILE PANCIU-Blanc de Blancs will be thea highlight of the diplomatic parties and receptions and will bring glamour to the main diplomatic events of summer 2017.

On the account of the specificity of the land (terroir) of Panciu vineyard, the wine used to make the sparkling wine has developed unique capabilities unmatched in the world, specific to the high acidity lands.

The bottle fermentation and ageing process, in special conditions for a period of over 18 months, are bringing to the glasses a special aromatic sparkling wine, full of palates ranging from of lily of the valley, white flower fields and lime, all surrounded in discrete mineral aroma and flavour of freshly baked bread out of the oven.

The specialized tasters are describing the taste as fresh and balanced with a mixed of green apples, asian pear, roasted nuts and pomelo.

Domeniile Panciu Cuvée Prestige, the winemaker`s blended in the perfect XVII century tradition of Dom Perignon wines from Chardonnay, Pinot Noir and for a touch of modernity added some Fetească Regală (Royal Girl).

The sparkling wine is fully complying with the world known classic recipe of Dom Perignon, the friar who invented the perfect fizzy wine.

The magnificent beverage is the result of bottled secondary fermentation coupled with special cave maturation during 18 months and disgorging „à la volée” (without bottle refrigeration) that is fully preserving the exceptional flavor and created a sparkling wine of amazing quality and benefiting the uniqueness of Panciu area terroir.

The colour is yellowish and with pastry flavour that is transforming slowly in a after-taste of honey and dried fruits.

The specialized tasters are describing the palate as profound and rich with aromas of dried apricot, roasted nuts and a pinch of tropical fruits that evolves in a after-taste long-lasting and reinvigorating that is making us day dreaming on fines french pastry.

The Romanian A list of diplomatic guests will enjoy from July 1st to October 1st 2017 among other wonderful wines the famous Feteasca Neagra (Black Girly) from DOMENIILE PANCIU, a wine that was named THE BEST ROMANIAN RED WINE for 2014 and conquered the world public as the flagship wine of Romania.

As the Romanian wine is suffering from an acute lack of international promotion the campaign: THE SUMMER STARTS WITH DOMENIILE PANCIU WINE! will address this issue.

The campaign will present a carefully drafted list of the exceptional selection of wines from DOMENIILE PANCIU, celebrating the aroma and natural character of the wines coming from Vrancea region and appointed by the international recognition as the top line of quality in Romanian wine industry.

You could also join in the program by consuming, as a true Romanian ambassador, the wines of DOMENIILE PANCIU, offering as a gift this premium wines and enjoying the BEST ROMANIAN WINE for 2017: DOMENIILE PANCIU.