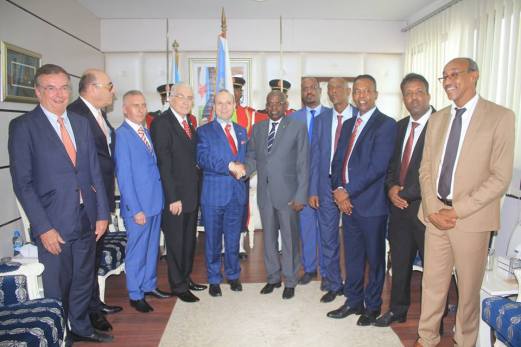 The dialogue between the two leaders was concentrated on the achievements that succeeded in placing of Djibouti as WORLD CAPITAL OF CULTURE AND TOURISM and ways to foster the image of the country, to promote cultural and economic exchanges and to boost the institutional cooperation between Djibouti and global tourism and cultural institutions.

During the discussions President Dr. Anton Caragea tabled the agreements established during his visit such as: the support for candidature of H.E. President Ismail Omar Guelleh as GLOBAL AMBASSADOR FOR TOURISM AND SDG`s, the parliamentary cooperation for sustainable development goals, tourism and cultural cooperation framework established with the Ministries of Culture and Ministry of Foreign Affairs.

Concluding the meeting and in carrying out the president Ismail Omar Guelleh instructions, H.E. Abdoulkader Kamil Mohamed, Prime Minister of Djibouti had officially conferred upon President Dr. Anton Caragea the NATIONAL ORDER OF 27 JUNE on the highest rank.

The recognition comes in fulfillment of lifetime achievements of President Professor Dr. Anton Caragea in developing an XXI century diplomacy, in promoting democracy and freedom and in the defense of peace on global arena has stated Abdoulkader Kamil Mohamed Prime Minister of Djibouti.

The decoration ceremony has taken place in the presence of the governor of Djibouti, members of parliament and presidency and was live broadcasted.

The high level dialogue was attended by the Minister of Culture, Moumin Hassan Barreh, the Minister Delegate for Trade and Tourism, Hassan Houmed Ibrahim, the Secretary General of the Presidency, Mohamed Abdillahi Waïs, the Chief of Cabinet of the Presidency, Mohamed Abdoulkader Ibrahim, the Director General of the National Tourist Office, Osman Abdi Mohamed, and high level delegates of the Institute of International Relations and Economic Cooperation.

WORLD TOURISM CONFERENCE TO BE OPENED IN THE PRESENCE OF PROFESSOR DR. ANTON CARAGEA
by Institute of International Relations and Economic Cooperation